Linda Morris is a Staff Attorney at the national ACLU Women’s Rights Project. Linda previously served as a Skadden Fellow in the Women’s Rights Project, where she focused on dismantling barriers to housing for low-income women of color and survivors of gender-based violence related to eviction records and criminal activity nuisance ordinances. She returned to the ACLU after serving as a Staff Attorney at the National Center for Law and Economic Justice, where she worked with organizers, advocates, and community members to fight debt-based driver’s license suspensions and other barriers to racial and economic justice. Outside of her work at the ACLU, Linda is an organizer for Tsuru For Solidarity, a grassroots project of Japanese Americans working to end all forms of state and racial violence.
Prior to law school, Linda worked for several years as an advocate for survivors of domestic and sexual violence in emergency shelters in Texas and Maryland, and at the Maryland Coalition Against Sexual Assault. Linda clerked for the Honorable Stephanie A. Gallagher at the U.S. District Court for the District of Maryland. Linda received her J.D. from the University of Maryland Carey School of Law, received her B.A. from the University of Maryland in College Park, and attended Howard Community College through the James W. Rouse Scholars Program. 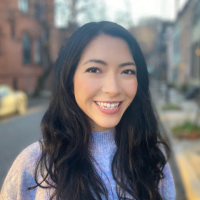