Out for Justice, Inc.

Nicole Hanson-Mundell is an expert on criminal justice policy and reentry navigation in Maryland with over ten years of experience in the field. She currently serves as the Executive Director of Out for Justice, a returning citizen, member-led nonprofit organization working to reform local and statewide reentry policies. Nicole leads Out for Justice by advancing its mission to engage, educate and empower those with criminal records to lead policy reform in Maryland. In this role, Nicole organizes large-scale expungement clinics, co-sponsors Baltimore’s annual All Night Resource Clinic, creates and manages coalitions such as the Maryland Women’s Pre-release Coalition, and has led a statewide campaign to ensure that every pretrial facility in Maryland has access to the ballot. In her voting work, Nicole has orchestrated voter registration opportunities for returning citizens, leading to over 400 returning citizens registering to vote during the 2020 general election. She has also served as an absentee ballot designee for over 85 Baltimore City detention center residents. Nicole also led Out for Justice in a collaboration with Morgan State University to conduct a reentry health needs assessment research project in Baltimore City. These efforts landed her two features in Forbes magazine where she was listed as one of the top five people in the country to make an impact during the midterm elections. The second feature captured her historic work during the 2020 general elections where the Maryland State Board of Elections was unprecedentedly mandated to engage currently and formerly incarcerated citizens. Nicole’s unique advocacy approach is to “stay close to the ground”, articulating the needs of marginalized people in policy spaces which garnered her a seat as the only impacted Black woman on Governor Hogan’s Gang Task Force. Nicole believes that the services and activities provided by Out for Justice are an efficient way for her to connect the policy work with grassroots, service-oriented efforts. Her passion for reentry work comes from her own life experience, which she harnesses as a tool to advocate for effective and practical legislation that positively impacts the community that she serves. Nicole also received the Women Leading in Annapolis award from The Daily Record in 2020. 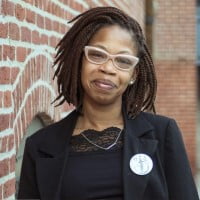